September Poll from Paradigma is out


Paradigma has now published its September polling, and it will come as no surprise: the race is a dead heat between LIBRE and the Partido Nacional. With the margin of error at +/- 2%, Xiomara Castro registers support from 22.8% of those intending to vote; Juan Orlando Hernández stands at 21.9%. 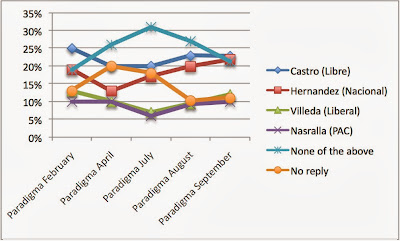 
the undecideds continue to be the determining factor for next 24 of November.


That storyline, though, seems less clear when we look at their own data. If we interpret "indecisos" as meant to correspond to the category marked NS/NR in their poll-- which means declined to state/no response-- then in the most recent period, they have settled down at around 11%, up one percent (e.g. within the margin of error) since the previous poll. The big movement there seems to be over; from August to September this category contracted, declining 7%. Yes, the remaining NS/NR could swing the election if they all, or most of them, went for one of the two leading candidates. But when we look at how the 7% decided between July and now, assuming they went for one of the two leading candidates, then we can see that they are splitting fairly evenly: from July to August Castro and Hernández both gained about 3%; Hernández added an additional 2% and Castro registered almost even from August to September, but these fluctuations are within the margin of error.

We still think the election is going to be decided by voters for the Partido Liberal and Anti-Corruption Party: if they stick with their sinking ships, then it is anyone's guess what will happen. But if significant numbers of supporters of either Mauricio Villeda or Salvador Nasralla defect systematically to the leading candidate closest to their own interests, they could change the race completely.

The other notable thing about the new Paradigma poll: for the first time since April, "none of the above" is no longer clearly in the lead. At 21.3%, this third option is also in a statistical tie with Castro and Hernández. That's 6% of voters who have decided between August and September to settle on one of the existing candidates.

Overally, the beneficiaries of movement in the poll are the two traditional parties, the Partido Nacional up 2%, and the Partido Liberal up 2.6%. That may be comforting for those in the traditional power structure who equate any challenge to the two-party dominance of Honduran politics with anarchy. So it is worth underlining how unusual this picture actually is: despite moving up in the polls, the Partido Nacional is just tied with an entirely new party, one that has seen Honduran media working hard to demonize it.

The actual end game here is likely to come down to how the voting process is managed. But whichever party wins this election, the old system is gone.