Honduran news media today published reports based on the latest CID Gallup poll, of a sample of 1220 voters surveyed between September 6 and 12. Reuters reported only that Xiomara Castro of the LIBRE party is in the lead at 29%, with Juan Orlando Hernández of the currently ruling Partido Nacional in second place at 27%-- a statistical dead heat, given the margin of error of +/-2%.

From May to the present in CID Gallup polling, Hernández has gained 9% in his support.

Where are those additional voters coming from?

Coverage of the poll in La Prensa provides information on all the major candidates, that we can use to show how CID Gallup polling looks over time (click for a larger image): 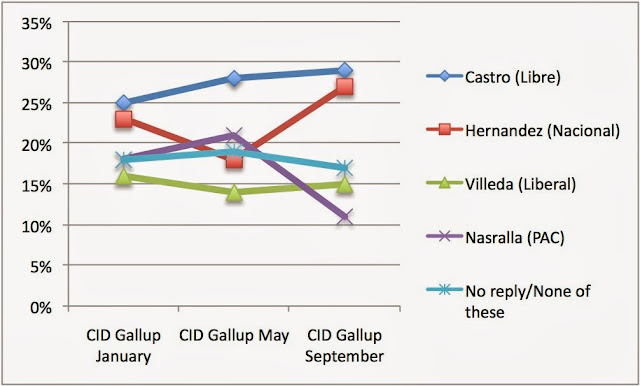 This suggests that the added voters for Juan Orlando Hernández could be members of the Partido Nacional who supported their party's candidate back in January, when he polled 23%, but fell away so that by May he polled only 18%, and now are back in the fold.

They could also include former supporters of Salvador Nasralla. The Anti-Corruption party candidate saw his support in the same series of CID Gallup polls rise from 18% to 21% from January to May, then fall to 11% in September.

It is also possible, as we have suggested previously, that something was odd about those May polling numbers from CID Gallup, which stand out when you look at all the polling over time (click for larger image; for clarity, does not include no reply/none of the above): 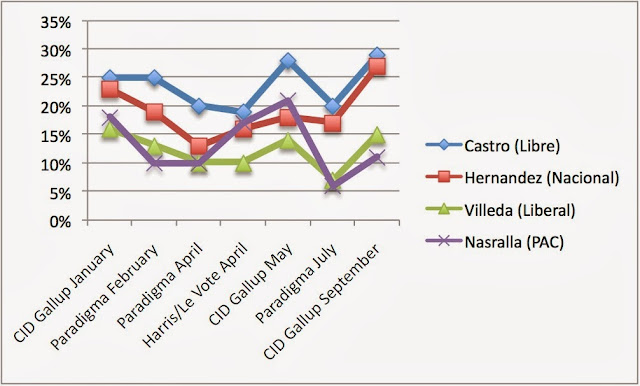 La Prensa repored that "Xiomara Castro is the public figure with the most favorable opinion among those measured in this poll". She has significant support from other parties, holding the loyalty of 93% of LIBRE voters while also drawing 15% of the Liberal Party vote, 3% of the Anti-Corruption party vote, and even 7% of the Partido Nacional voters.

Only 71% of  Partido Nacional voters say they would vote for their party's candidate today. An astonishing 14% either decline to state their preference or are not in favor of any of the candidates running now. The remainder of the Partido Nacional members support Xiomara Castro (7%), Mauricio Villeda (4%), or Salvador Nasralla (4%).

Things are worse for the Liberal Party. Only 62% of its members would vote for Mauricio Villeda today. Hernández and Nasralla would receive 6% and 7% of the Liberal Party vote, and Xiomara Castro would get 15%. Another 11% of Liberal Party voters simply do not like their options, or are not prepared to express affiliation with any of the candidates.

The CID Gallup poll also assessed the candidate preference of voters who either have no party affiliation, or were affiliated with some other party.

With the Partido Nacional base split, we still see the same race it has been all along: one new party (LIBRE) that has run in the lead throughout the campaign, and a close second (Partido Nacional).

That political calculus may reflect another of the CID Gallup poll's findings: "reported doubts about the capacity of the Tribunal Supremo Electoral to organize and execute honest and transparent elections".