In Honduras, it is illegal to poll the last month before the presidential election.

Today El Heraldo published the results of the latest, and last, CID Gallup poll in the presidential race.

Their headline: At one month before the elections, JOH one point advantage over Xiomara.

Based on polling conducted October 6-15, the CID Gallup poll reportedly finds voters who intend to vote breaking 28% for the Partido Nacional (Juan Orlando Hernández), 27% for LIBRE (Xiomara Castro), 17% for the Partido Liberal (Mauricio Villeda), and 9% for the Anti-Corruption Party (Salvador Nasrallah), with 3% each for the candidacies of Andres Pavon and Romeo Vasquez Velasquez, and a reported 3% "do not know/declined to respond".

The absolute numbers in these Gallup polls are always higher than those in other polls, apparently because they are not including the voters who say they may not vote. The trends are clear when we look at the Gallup polling data over time: Nasralla continues to slide down; Villeda has drawn a small number of voters as the Anti-Corruption party declined; but the main increase tracking the decreases in the Anti-Corruption Party is in the institutional Partido Nacional. 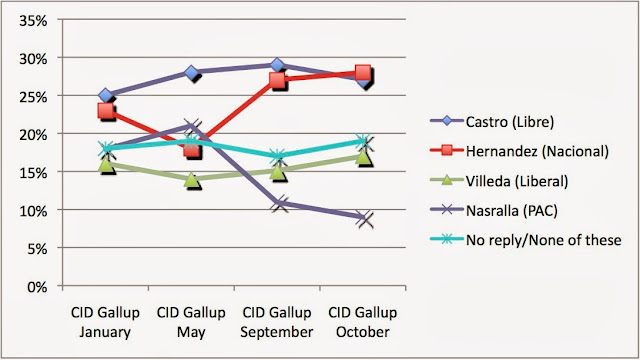 There is evidence in this latest poll, as there was previously in the fine grained data from CESPAD, that party affiliation is breaking down. While the Liberal Party was identified as the party affiliation by 22% of those polled, Villeda draws only 17% of the vote. Similarly, while Hernández has a reported 28% of the intended vote, 35% of those polled identified as Partido Nacional members.

CID Gallup doesn't let us speculate on where those other Partido Liberal and Nacional voters are going; CESPAD, though, showed in August that 23% of Liberal Party voters then favored LIBRE, as did 7.6% of Partido Nacional voters not favoring Hernández, with almost the same number then planning to vote for Nasrallah.

El Heraldo's story reports on a number of other polls, some of which, like Paradigma, we have been steadily tracking. These minor polls range from one by Opinión y Analísis that has Hernández at 28.1%, Castro at 23%, and Villeda at 20.1%; to TecniMerk showing Castro winning with 31.9%, Hernández at 22.8%, and Villeda at 13.2%.

While these two minor polls should be questioned due to the wide margins of victory they project, not seen in other polls, they are at least consistent with the other polling that shows LIBRE and the Partido Nacional running head to head. A third minor poll mentioned by El Heraldo, from a firm called Inteligence, seems anything but credible, as it is alone in having the Partido Liberal ahead, with 34.8% of the vote, leading the Partido Nacional at 28.33% and supposedly showing LIBRE in third place at 16,15%. It is almost as if this poll inadvertently reversed LIBRE and the Partido Liberal.

One of these candidates will receive the most votes in November. If election monitoring prevents fraud-- a big if in Honduras-- that same candidate will become the next president.

The current polling data do not allow identification of a clear leader, but do tell us that the traditional two party system has been effectively challenged for the first time in Honduran history: LIBRE and the Partido Nacional are the clear leaders vying for control of the presidency, and one of these did not exist at the time of the last election.

Whatever the outcome, the political landscape has changed in Honduras.