"The freedom and fairness of this election is very much at risk": US Congress members

In a letter dated October 15, Representatives Mike Honda, Raul Grijalva, and Hank Johnson urge Secretary of State John Kerry to speak out against factors that they argue make "the freedom and fairness" of the Honduran presidential election questionable.

You can read their press release for their comments on why they wrote. The headline singles out "Militarization of Civil Society Ahead of Honduran Election".

They note that the new militarized police was a signature policy of the presidential candidate of the Partido Nacional. They express concern about the consolidation of control over all branches of government by the same ruling party-- including control of the electoral process.

We agree that the integrity of the electoral process must be a concern.

But even more troubling, the congress members draw attention to a pattern of assassinations of candidates for office from the LIBRE party. They cite sixteen "activists and candidates" murdered since June 2012. Anthropologist Adrienne Pine reports a similar number, and comments that


LIBRE has been focused on keeping the campaign positive, and so the official reaction to all the targeted assassinations...has been near silence.


The congress members express concern that the US Embassy in Tegucigalpa


has not spoken more forcefully about the militarization of the police under the impetus of one of the candidates, expressed concern with the National party's concentration of institutional power through illegal means, and condemned the ongoing intimidation against the members of the opposition.


The letter ends with a polite yet firm indictment of the US for taking a premature position on the election in 2009-- when the country was under intermittent states of siege, with a government repudiated by the entire world in control of the presidential elections-- and declining to take a stronger position today. They write:


We are of the opinion that our government would lose credibility in Honduras and the region should it be perceived as taking sides in the election or turning a blind eye to fraud and unfair electoral conditions....It also appears that the State Department has largely countenanced the concentration of institutional power in Honduran government in the past year, in the hands of the ruling party candidate, through illegal means.


use every available means to ensure free and fair elections... to guarantee a level playing field in the weeks preceding the election,... and to be entirely neutral in its public and private messages to this country. In addition, we request the Department of State to speak forcefully against the pattern of concerted attacks targeting human rights defenders and the opposition.


"To be entirely neutral in its public and private messages to this country".

As these Congress members note, the US State Department has come out as neutral in the election, and willing to work with whatever candidate wins. One would have hoped that went without saying, but the implication is that at least some political actors in Honduras may think the US government is tacitly or quietly or privately favoring specific candidates-- those that represent the traditional political hierarchy of the Partido Nacional and Partido Liberal. To be neutral shouldn't require assurances that you will work with whoever is elected (implicitly, however repugnant their policies might be). Neutrality is interpretable in this context as hoping LIBRE doesn't pull ahead.

As the writers of this letter note,


many in the region are well aware that in the past, the United States government has indeed supported specific candidates in Latin American elections, particularly in Central America.


They cite in particular the 2009 election in Honduras when the US announced it would recognize the outcome of the Honduran election, literally while people in Honduras were living under conditions suppressing their freedoms of speech and assembly, and despite the lack of any clear path for independent international observation of the election in 2009. That premature announcement derailed negotiations that might have led to the 2009 election being held with the elected president restored to office; instead, the 2009 election was seen by a wide sector of the population as illegitimate.

Read the letter for yourself. These are serious concerns by serious people paying attention. As this tight election heads into its final weeks, the range of tactics used by the Partido Nacional is already becoming ugly. Maybe the US is irrelevant in Honduras; but no one I know believes that. 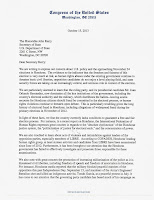 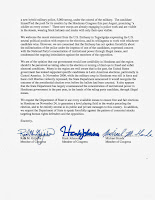 In unrelated news, Foghorn Leghorn sent an open letter to the fox asking him to guard the hen house.

The problem with ironic comments is they are open to multiple readings. I assume (but may be wrong) that you are implying that the letter by these congress members is meaningless (Foghorn Leghorn) because after all, the US is complicit in the power relations that exist in Honduras. Well and good: but having someone in the US government actually paying attention to the way the US is behaving in Honduras is meaningful-- and in the last year we have seen more press attention to the details of what is happening there, and more attentiveness by Congress members. We are not about to give up.

I agree with you 100%. I didn't intend to compare the signatories to Foghorn Leghorn in any way.

Influencing Obama and Kerry and the agencies they relate to involves showing that they will be held accountable for caving in to the old guard hawks that have run policy including Obama's. Even that is usually not enough.

I guess one of the motives for my comment is the presumption that open letters to Obama may inspire a moral dilemma in the president as opposed to W. Bush, who is understood to be the enemy. I can't distinguish between the two's policies in this region.

Thanks for the clarification. It may seem like Congressional statements like this are mere rhetoric. Since we know the work it has taken to inform congress members of the realities on the ground, we see these efforts as significant. One such effort led to Congress freezing $30 million of security funding in 2012. As we all know, the State Department's assurances to Congress intended to restore funding were later exposed by the media as misleading (at best).

How one sees this sequence depends to some extent on whether your expectations are set high or low. We see the mere fact that there are people in the US government who are paying attention as a major step forward; and especially, that the media cover the story now in such a way that incidents like these are detected means for once we are seeing how US policy affects Honduras.

Finally, I do not think that the Grijalva letter is based on the premise that the president will experience a moral dilemma. It is a reminder to the State Department that Congress is not just a rubber stamp for whatever representation about Honduras might be made. In the run-up to an election that could see a candidate from a new party elected, this is important. If the US repeats the premature endorsement of the election's outcome that was its signature in 2009, that could be immensely destructive. If it stays completely silent, that could allow the Honduran establishment to read into the silence consent-- as happened in the aftermath of the coup in 2009. A statement from part of the US government that this will not be tolerated is important for Honduran activists.