One Year of Resistance: What Could Porfirio Lobo Sosa Do? 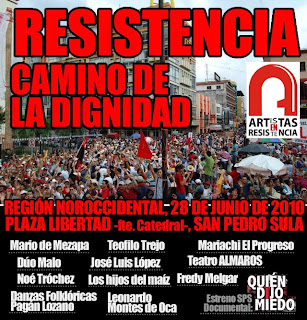 As I write this on June 26, one year has passed since the day we left Honduras. We had tickets to return in a couple of weeks to continue our work. We also knew we would be returning later, in August or September, for another event.

The political situation was tense enough that we told the students who were staying to be careful. In particular, despite any interest they might have, we suggested they stay away from the central square in San Pedro Sula on Sunday, when the polling for the cuarta urna initiative would take place. We were concerned there would be violence, given the passion and at times, frenzied irrationality, of those protesting Manuel Zelaya's proposal to test the depth of support for constitutional reform.

But despite conversations about rumors of a coup with Honduran colleagues, we did not believe, truly believe, that Honduras could turn back to that past. So when we were wakened on June 28 by a call from one of our students with the news of President Zelaya's kidnapping and expatriation, the disruptions of media and internet service, and cut-offs of electricity, we struggled to come to terms with this failure of democratic process.

We are still struggling to understand it, and the events that followed under the de facto regime, and continue under the administration of Porfirio Lobo Sosa. We have, with many others, found the actions of the United States disappointing, and determinative in breathing new life into the de facto regime at points when it seemed that a restoration of the elected government might be possible. Instead, Roberto Micheletti held on to his delusional "presidency", destroying any chance for elections to be held that would allow for participation by dissenting politicians and that might have honestly acknowledged the level of nonparticipation and open repudiation of elections held after such a breach of public order.

One of the things we struggle with constantly is the question, what could a real leader in Honduras do at this point to begin a process that might allow the country to come to terms with these events sooner rather than later? We have, like others, been horrified at the cynicism of the US position that ticks off a list of gestures in order to claim that the coup is behind us. We think there is ample evidence that the gestures Porfirio Lobo Sosa is performing satisfy no one except the US, and have further weakened Honduran government and civil society.

So we debate, constantly, the question: what might Lobo Sosa do now that could genuinely make a difference? Is Honduras doomed to spend an entire presidential administration in this state of suspended animation? In commemoration of one year of Honduran resistance to this coup and its aftermath, we offer the following list of actions that a Honduran president who truly wanted to start a process of national dialogue would have to take:

(1) Declare officially that the coup d'etat was an unconstitutional disruption of the rule of law. We know from his candid statements to Spanish media that Lobo Sosa admits that a golpe took place. But Lobo Sosa not only was incapable of leading the members of his own party to repudiate the coup after the November elections, he assented to the Congressional resolution reaffirming the illegitimate actions of June 28, 2010. As long as the official line in Honduras is that what happened was legal, there is no possibility of coming to terms with what happened.

(2) Recognize the existence of the FNRP as a legitimate voice of opposition, respect the insistence of the FNRP on determining its own structure and leadership, and acknowledge its communications as legitimate political statements of an autonomous public opinion that cannot be dismissed as "radical". This one is complicated. Honduran politicians want to neutralize the FNRP by drawing attention to its internal debates (as if such differences in opinion are absent in other political groups), by characterizing it as radical, and if those attempts do not work, by suggesting it is simply a typical political movement that will be converted into a conventional party. It will be a challenge for Lobo Sosa to craft a statement that accepts the legitimacy of the Frente without also attempting to redefine it or minimize its importance. But it is critical that he acknowledge that the conventional political parties whose presidential candidates he drafted into his cabinet do not represent the opposition to the coup, and thus, that his government is not one of "reconciliation and unity".

(3) Fund Sandra Ponce, the Fiscalia de Derechos Humanos (who has the investigative and prosecutorial authority for responding to complaints of human rights abuses) and direct her to immediately investigate the human rights abuses documented by the IAHRC. State clearly and in public that he accepts the IAHRC's findings and acknowledge that abuses continue today.

(4) While we doubt Lobo Sosa has the political power to do it (and we question whether he has the support to accomplish even the first three items we list) if he could, he should remove from executive branch offices those proponents of the coup d'etat appointed by Micheletti who are still to be found throughout the Honduran government.

(5) Acknowledge formally that he cannot guarantee Manuel Zelaya Rosales that if he returned to Honduras, which is his legal right, he would be free of politically-motivated prosecution. By insisting that Zelaya can return anytime, without admitting that the judicial branch, full of adherents of the de facto regime and complicit in the coup d'etat, is primed to pursue prosecution of a frivolous list of charges, Lobo Sosa is being disingenuous. Hondurans were encouraged in the months leading to the coup to be afraid of political differences, and were inspired to call for adherence to narrow orthodoxies of thought, belief, and action. Zelaya is one of the most powerful symbols of the purging of political diversity, and if Lobo Sosa would acknowledge that the country cannot tolerate his presence, he would be acknowledging that the country is not capable of healthy political debate.

(6) Finally, we would hope that Lobo Sosa could find the courage to reject the utility of the artificial performance of the steps outlined for Micheletti in the Tegucigalpa-San Jose Accord. He needs to be the one to admit that having politicians from other parties in his cabinet is not "a government of unity and reconciliation". He should be the one to say that Honduras is not ready for a "Truth Commission" constructed simply to give cover to a few powerful international allies that want to stop having to deal with Honduras. He could do more good by saying clearly what everyone in Honduras knows: the truth of what happened on June 28, 2009 is well established. There is nothing about the events that is unclear. It is how people in support of the coup justify those events, in contrast to how the opposition understands them, that is separating Hondurans. And those are not matters of truth: they are matters of interpretation. If Honduras needs to move on, what it needs to move on from is precisely the terms of the Accord, which never worked, never really stemmed from Honduran intentions, and stands in the way of the country beginning to confront the fissures that broke open one year ago today.
Posted by RAJ at 9:29 AM