Why block access to a statue of Francisco Morazán?

That detail in stories about Wednesday's attack on marchers from the Frente de Resistencia in San Pedro Sula may not have resonated with readers who are not from Honduras or Central America.

But it is important, both because of the intent of the marchers to stop there, and the fact that this is where the chief of police chose to draw his line in the sand.

The attack itself started later, when the marchers were reaching the 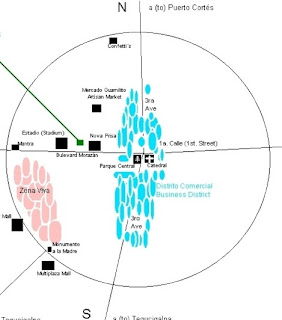 Parque Central via the alternate route of 2a Calle. But it was reportedly preceded by a "dialogue" between the police chief and the Frente. This concerned whether the marchers would be allowed to reach the statue of Francisco Morazán that stands on 1a Calle, which is more generally known in San Pedro as Bulevar Morazán. The statue is located near the main soccer stadium on 1a Calle.

The most detailed descriptions of the route followed by the FNRP marchers says they began at the Mercado Dandi at around 10th Avenue east-- the southeast quadrant of the four quarters of the city. From there, they marched west, reportedly along 7th Calle south, a total of 24 blocks to 14th Avenue west. At that point, they turned north and proceeded to within one block of 1a Calle.

The reported moment of confrontation with the chief of police came at this point, when the marchers wanted to go to the statue to leave what the news media called "a floral tribute" to Morazán. The police claimed that doing so would interfere with the official march down 1a Calle.

This is not particularly surprising. What is interesting is that the chief of police of San Pedro Sula, who immediately afterward ordered the use of disproportionate force against the marchers as they proceeded down 2nd Calle south, walking east toward the Parque Central, apparently offered to let a dozen or so people from the Frente go to the statue to place their tribute to Morazán.

Why even offer a compromise, when it is clear that he was prepared for an all-out assault on the marchers?

And why was this a goal of the Frente in the first place?

The answer, it seems to me, lies in the symbolic importance of Morazán, revered in Honduras as the leader who tried to forge Central American unity and died in the attempt. When you are trying to refound a nation, you return to the imagery of the founders. In previous posts we have drawn attention to the citation of Lempira, the Lenca resistance leader of the 16th century, in a similar fashion. Like that case, the historical resonances are not vague, but quite specific.

Francisco Morazán won election as president in 1830 against a conservative opponent. As a Liberal, he advocated for federalism: autonomy within unity. His legislative agenda was to promote equality, freedom of religion, and public education. The policies he encouraged challenged the standing of the church as a civic power, and gained him a powerful enemy.

In 1839, during his second term in office, the independent states making up the union withdrew from it. In 1840 Morazán went into exile in South America. In 1841, reportedly motivated by dangers to local autonomy he saw in the British presence on the Moskito Coast of Honduras and Nicaragua, he returned to Central America. He rapidly overthrew the head of state of Costa Rica, and began to plan a campaign to reunify Central America. Opposing forces captured him and on September 15, 1842, he was executed in San José, still insisting that union should be the goal of the region.

His last will and testament is a widely cited expression of patriotism in Central America. In it he says in part:

I declare: that I have not deserved death, because I have committed no more fault that to give liberty to Costa Rica and to procure peace for the Republic.
...

I declare: that my love for Central America dies with me. I rouse the youth, that are called to give life to this country, that I leave with regret for its remaining in anarchy, and I desire that they should imitate my example to die with fortitude before they leave it abandoned to the disorder in which unhappily today it is found.

...
I die with regret for having caused some evils for my country, although with the true desire of procuring it good...

Morazán exemplifies dedication to the cause of reforming government, even in the face of overwhelming odds. The reforms he called for were intended to broaden civil participation in Central American society. While the region has not reunified, the form of government he championed largely has provided the blueprint throughout the region. It surely provides one of the main statements of founding values.

These resonances may be part of the reason the FNRP in its "Proclamation of the 15th of September" invoked a different anniversary than the 189 years of independence from Spain:

Today the 15th of September of 2010, it is 168 years since the assassination of our hero, Francisco Morazán, with his example and that of all the women and all the men that gave their lives to achieve justice and equality, we will continue to victory.