Mobilization and Repression on Independence Day

reads one; the other

The Police Dislodge the FNRP

The first story, time-stamped 9:41 am reported that "tens of thousands of people" marched in San Pedro Sula, attempting to stop at the statue of 19th century founding father Francisco Morazán before proceeding to the lovely main plaza of San Pedro where a concert was planned.

The second headline, posted at 11:23 am, sadly, leads a story of brutal violence used to shut down a concert with popular pro-Resistance performers, Cafe Guancasco. The photos and videos are shocking, recalling the most violent moments of the de facto regime's attacks on the people of Honduras. 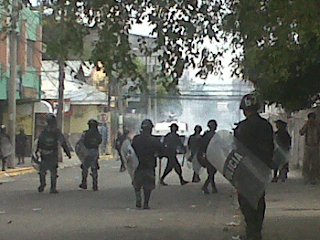 Andrés Pavón, president of the Committee for the Defense of Human Rights in Honduras (CODEH), reported that Efraín Hernández Villalta, a lottery ticket salesman who habitually worked in the Parque Central, died of the effects of the massive tear gas attack. Others were badly injured by beatings, with witnesses reporting not just the use of the batons issued to riot police (which are bad enough) but of wooden clubs.

Revistazo quotes the rationalization provided by the police:

they said that they were obligated to disperse the demonstrators, in the face of the intrusion that they made in the marches of the schools in the patriotic festival.

It is not clear what this might mean. With even less credibility, an unnamed police member is quoted as saying

"We had to disperse them because among them there were people carrying firearms and they tried to make disturbances."

What seems really to have happened is somewhat different. The Artists in Resistance had set up a stage for a concert. The police attack was unprovoked and coordinated, with tear gas shot into the plaza from the banks that line the north side. Water cannons were used on the stage and the band, destroying the equipment and instruments there.

While El Tiempo reported the violence in San Pedro promptly, other Honduran news media, while at least admitting that "thousands" of members of the Resistance marched in Tegucigalpa, downplayed the incident. La Prensa wrote that in San Pedro Sula "some incidents without major consequences were registered."

La Tribuna presented the most complete account of the rationalization by the security forces of the attacks in San Pedro Sula:

The march coordinated by the Frente in San Pedro Sula was detoured at 10 AM, apparently because it had presented disturbances, according to the report of the National Police.

The Police intervened when the two marches coincided in the city center, with the result of various people beaten and detained, but then both continued along separate streets, according to local media.
...

In San Pedro Sula, the resistance began its march, walking from the Dandi market along 14th avenue, nonetheless one block before arriving at 1st street [more commonly called the Boulevard Morazan after the statue located there] it was diverted.

The chief of police of San Pedro Sula, Héctor Iván Mejía, spoke with one of the directors of the FNRP and would have allowed a commission of 12 to 15 people to go to place a floral offering at the statue of General Morazán, but they did not accept this and continued their walk along 2nd street until they arrived at the Parque Central.

“We used the human and material resources that the State assigned us to maintain order. They wanted to install themselves next to the other march and according to intelligence reports they wanted to do damage to intimidate those that were peacefully marching", said Mejía.

There are familiar strategies here. Claiming to have "intelligence reports" of violent intentions to justify a pre-emptive attack; the police as reasonable actors offering a compromise (one that limits the freedom of assembly and speech of the citizenry); vague claims of disturbances, and minimizing the actual security violence and injuries.

El Tiempo has now updated its website with a long article that effectively refutes this account. They write that "The indiscriminate dislodging provoked chaos and confusion".

They report that the attack in the Parque Central was by the dreaded Special Squadron Cobras and even members of the Armed Forces.

Among those injured and affected by tear gas were onlookers, members of the press, and reportedly, some students.

Members of Cafe Guancasco have issued their own statement describing the unprovoked attack on the stage.

Videos of the moment of confrontation show resistance members attacked without provocation. The Roman Catholic church that faces the square appears prominently in the background, with clouds of gas floating into the crowd.

So let's be sure we understand this: the repression was, as has become normal, disproportionate. The primary victims were musicians and those waiting for a concert, one of the activities through which members of the resistance have continued to express solidarity.

And one harmless vendor died.
Posted by RAJ at 8:08 PM

Radio Uno, which has a protective order issued by the Honduran Supreme Court at the request of the CIDH, was also attacked by police in San Pedro Sula.

The protective order was ignored by police. Tear gas canisters were shot through its windows. It was not anywhere near any of the protests, being about 5 blocks from the central plaza and a block off the official parade route.

It was an attack unmotivated by anything going on around it.

Only 2 videos are available via the provided link. They are prefaced in blog by the comment, ““videos of the moment of confrontation show resistance members attacked without provocation”. This is what I expected to find in the 2 videos. But, this is not what the videos demonstrate or document. Turn off the audio, watch both videos as analytically as possible, and imagine them being used in a courtroom as evidence or something like that. Are they evidence of the things many websites claimed they are? In video #2 (“Policia Altera 15 de Septiembre en Honduras”), attendees and spectators are intermingled with police all about sidewalks and do not appear concerned by the police presence. The video really doesn’t depict anything of interest – less you count the fact that the videographer has a great position, is surrounded by police (many of whom look directly at him), and appears unconcerned that he is potentially filming a potential a police crackdown. This is noteworthy, and the exact opposite of what is stated or implied on several websites where statements regarding camera confiscation and destruction are made. In video #1 (“Repression 15 Septiembre Resistencia Honduras“), the coverage clearly does not show what is claimed. In fact, the “moment of confrontation” is exactly what is missing from the video. Nothing seen in the video reveals what immediately preceded the gas, nor the nature of any attack nor response. Gas can be seen down a street not sufficiently depicted on video. A second gas source is seen in the nearby park, but nothing in the video documents why or how this started. In the chaos that ensures, many people can be seen fleeing the park area, some into a street near where the gas was first seen on video – and worth noting is that these people pass a street brigade of police without incident, not with incident. Countless bystanders on the street being used as the mass exit do not leave and simply watch what is going on, presumably unconcerned with any danger as they are a distance from the gas. At points throughout the video people with cameras can be seen. The videos provided do not show what is claimed they show. Now, I for one believe the Frente was attacked and likely nothing provoked it, certainly nothing that made the police response proportional. That said, the video does not demonstrate “without provocation”, which next to the actual attack and harms/deaths, is the most important element.

Thank you for deconstructing the video in such detail. I have to disagree, but I leave it up to others to review it.

What you must, however, acknowledge is that the police attacked a demonstration with a massive amount of tear gas, used water cannons to destroy the stage and the instruments of a band starting a concert, and that no one-- the police included-- has even claimed that these marchers themselves committed any violence.

That means the attack was unprovoked and the violence disproportionate. Pointing to people you can see who are not fleeing the tear gas doesn't bring back to life the person who died as a result of the attack.

The pro-coup media have tried to claim that Frente marchers were intimidating people in the official march. But even this breaks down as a rationale for the attack on the Parque Central. The Frente march took the route along 2a Calle, not 1a Calle.

Using the fact that a video survived to argue against the reports by others of the destruction of films and confiscation of cameras is simply ludicrous. It does not surprise me that the videos that survived are those that are less revealing. I do not start, as you seem to do here, with the idea that tear gassing a crowd is OK as long as it is not too violent.

So thanks for the comment, but next time, try to make it briefer, OK? because you don't get more convincing by going on and on. You get less convincing. And the spam filter thinks your long comments are spam, so they are likely to be overlooked by us and deleted automatically.

Carlos Tower was unhappy with my reply to his overly long and in my view almost incomprehensible comment posted above. His main point appears to be that the only videos that survived the attack do not show the very first phase of the attack by the police. He writes

Now, I for one believe the Frente was attacked and likely nothing provoked it, certainly nothing that made the police response proportional. That said, the video does not demonstrate “without provocation”, which next to the actual attack and harms/deaths, is the most important element. (emphasis added)

I thought his original post spoke for itself. He is trying to excuse an inexcusable attack by diminishing the damage caused.

The attack used so much tear gas that an innocent man died. The attack targeted the stages where a concert was beginning, and destroyed equipment of the band. Tower either has not read or simply discounts the statements of the two bands who lost equipment as a result, which are consistent with all other witness accounts in saying that the police attacked without provocation.

That phrase "likely nothing provoked it...that made the police response proportional" implies that for Tower, there could have been justification for the attack. He thinks that it is important to establish that the only videos that survived the violence don't show the start of the attack.

Let's be clear here: my position is that there is nothing that would justify the police forces of any democracy attacking its own citizenry exercising their freedom of speech.

Trying to justify this kind of attack is apologism. In the history of non-violent protest, one of the main approaches of apologists has been to try to find some action by demonstrators that can be characterized as inciting attacks by security forces. We feel no obligation to advance the cause of apologism.