The OAS audit of the TSE's software was accurate in its concerns: the vote counting part is turning out to be less than perfect.

Observers have noted several anomalies, some of which have been corrected, and others of which have not.  Here's an example that was still visible in the system as of this morning.

Consider the following screenshot (from the TSE's website here) taken at 1:19 pm today.  Click on the image for a larger version. 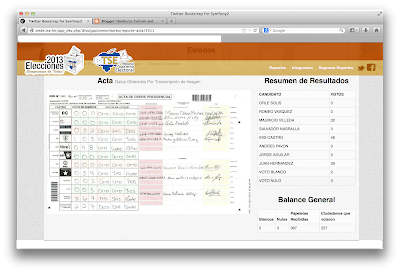 This shows the scanned Acta for MER 3311 of the Escuela Leonardo Aguilar Oseguera school voting site in San Pedro Sula. On the left is the scanned Acta; on the right are the vote totals that the TSE credited to each candidate for this MER.

Precisely how those vote totals enter the system is unclear from TSE-provided information.  Are the handwritten Actas submitted to an automatic optical character recognition system (ReadIRIS was mentioned in one TSE story about the vote counting system) or are the tallies entered by someone reading and entering the values for each candidate?

In either case, the vote total listed for Nasralla on the TSE website is only 3 votes, not the 103 votes listed on the tally sheet.

We are not alleging any mischief here (although that's possible). Rather, this is precisely the kind of sloppiness the OAS audit of the software used led us to expect.

This Acta should have failed the software confidence checks (because the number of votes in the tallies does not match the number of votes allegedly cast in this MER). But it either wasn't flagged by the system supposed to catch such inconsistencies (it should have detected as an under vote), or else a human intervened and OK'd the result: human error.

In either case the erroneous numbers were submitted to the vote tallying system with these inconsistencies and were tallied, giving Salvador Nasralla of the PAC party 100 fewer votes than he actually received from this mesa.

These are all officially approved tallies, officially approved errors, not the Actas sequestered for inconsistencies. An Acta does not appear on the website if it hasn't been included in the vote totals, so the TSE thinks there's no problem with this one.

We beg to differ.

This is just a single example of the kinds of errors we are seeing in the vote totals publicly provided by the TSE.  The sad part is that it is not unique. There are many similar kinds of errors visible in the Actas posted on the TSE website.

The software audit by the OAS said the vote totaling system did not meet international standards for such systems and needed a lot more work (and a reimplementation) to do so.  It looks like the TSE went ahead and used this poor quality software, which would mean it should independently audit all of the Actas and vote totals for consistency and sanity (meaning, are the numbers reported consistent with the number of voters in a specific mesa) before declaring anyone a winner.

Other errors that were apparent earlier are now systematically being corrected, so it will not surprise me if by the time this blog entry is published, the errors I know about (including the one above) have been made to disappear.

But it is these kinds of failings, and silent corrections without acknowledging the failings, that reduce public confidence in the TSE and its official results, leading people like Salvador Nasralla and Manuel Zelaya Rosales, ask for a public, open, recount of the official Actas before the TSE declares a winner.

A public recount of the Actas would go a long way to providing confidence that everyone is adding up the same numbers to get the same vote totals, which frankly would improve public perception of the TSE.

Without that, no matter how many international observers say the process on Sunday was legitimate, there will remain large segments of the Honduran people who believe that the process after Sunday was not.
Posted by RNS at 11:44 AM