We are not Nate Silver.

And the Honduran election isn't producing the wealth of polls Silver had available for the US Presidential election.

But since we are going to continue to cover Honduran presidential polls, we think we should contextualize the few available as much as possible so readers can think about what is going on with something more than the prejudices Honduran candidates, and some Honduran commentators, are bringing to bear to "interpret" polling data.

Consider this graph of support for the major candidates in all the polls we have seen since the first appeared in January (there are some smaller parties polling less than 1% but except for rhetorical interest, they clearly are out of the running): 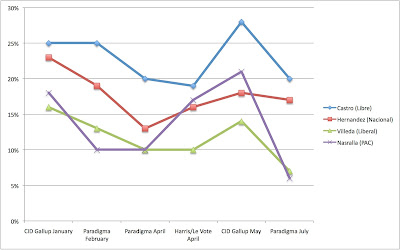 Xiomara Castro of the Libre Party started the year in the lead over the other three major candidates, and has maintained a lead in each poll since, regardless of differences in the absolute numbers reported. That's the first take-away point.

If you look at the two CID Gallup polls, between January and May, they found Castro and Nasralla increasing their share of support, while Hernandez and Villeda-- representing the two traditional parties-- lost supporters. That's the second point: the 2009 coup has indeed changed the political landscape.

And there is one more important point to understand about the polling.

The CID Gallup poll from May stands out, with Nasralla leading Hernandez. Then in the latest Paradigma poll, three of the four leading candidates appear to decline sharply in support.

Either May to July was a politically volatile period, or the CID Gallup poll from May is not like the other polls.

There is at least one obvious difference: Paradigma reports two additional categories: No response, and none of the candidates. So does Harris/Le Vote.

CID Gallup only provides numbers for no response. Its no response category is reported to be about the same as that of the Paradigma and Harris/Le Vote polls (ranging from about 13% to 20% in the different polls).

CID Gallup is essentially making people choose between the declared candidates, or decline to respond-- but not giving them the option that the other polls have, to say they do not like anyone in the field.

Take a look at the data over time from Paradigma (click to see the graph at a larger scale): 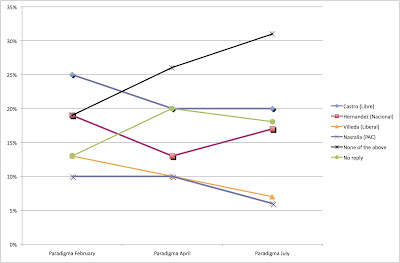 Who's in the lead? None of the Above.

And None of the Above is gaining ground steadily: from 19% in February to 26% in April and over 30% in July.

The Harris/Le Vote poll for April reported almost the same level of respondents who supported none of the existing candidates: 22%.

And watch out for None of the Above. While she can't be inaugurated president, whoever does end up being sworn in will face a real governing challenge with almost a third of the electorate so disconnected from the options offered.
Posted by RAJ at 12:14 AM

Avid follower for the last couple of months.

There's a study done by keller y Asociados, paid for by the Honduran chapter of CEAL. Don0t know if you've read.

It's a qualitative study, small focus group but the results are in line with some of the polls you showed (maybe except Nasralla which they place in second).It's from May 2013.

Anyways, could be worth a read.

Thanks for the link. Some of the polls (but not all) have explored differences like those in this focus group study, between all voters and likely voters. In general, the trends seem to be pretty consistent; the levels of support measured change over time, and with methods used by different polls.

The softening of support by core voters of the two main parties is one of the threads we have commented on before, noting that party preference since 2006 shows

"steady erosion of support for the National Party since Porfirio Lobo Sosa took office, from 38% to 32% of the electorate."

At the same time, Hernandez was drawing his support primarily from National party members (48% of that party) with another 20% of these voters at that time supporting Nasralla. Another 17% of voters identifying with that party either had no preference or declined to state one.

It is a very unusual situation in terms of party sentiment.