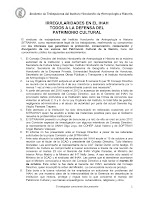 SITRAIHAH, the union of employees of the Honduran Institute of Anthropology and History, announced yesterday that it is on strike


beginning Tuesday the 31 of october and for an indefinite period or until Virgilio Paredes Trapero, directly responsible for the institutional crisis of IHAH, is removed from his position as Gerente (Director).

Paredes is the controversial director of the key cultural heritage institute whose actions have included, among other things, agreeing to give the town of Copan Ruinas control over archaeological research at the site, and the management of the cultural heritage properties that emerge from that research; diverting financial resources necessary to the survival of the Institute; and engaging the institute's prestige, sponsorship, and resources in a laughable quest for a mythical city, run by a team lacking any of the legal requisites to undertake such work in Honduras.

As part of this strike action, El Heraldo reports, have


"posted themselves this morning at the access gates of museums and installations in the charge of [IHAH] in response to the failure of dialogue with the director, Virgilio Paredes."

Photos accompanying this article show locked gates in the route leading up to the main offices of IHAH in Tegucigalpa, also the site of a museum, and locked gates with posters on the former Presidential Palace, also in Tegucigalpa, today a major historical site and research center.

By law, the union notes, the advisory Council (Consejo Directivo) of the Institute is supposed to meet with at least 4 of its mandated members at least once a month. A circular from the IHAH union (available here as JPG images) states that


Beginning in the period of 2010 through 2012 the absence of sessions owing to the failure to convene them by the secretary of the Consejo Directivo, who is the Gerente of IHAH, has provoked profound damage to the Institution such as the signing of agreements that violate articles 2, 5, and 6 of the Ley Orgánica del Instituto, the total failure of the management, administrative negligence and abuse of authority on the part of the present Gerente, Ing. Virgilio Paredes Trapero. 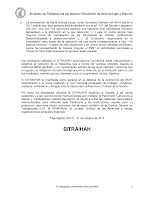 Paredes was, as is described in many posts available online, appointed during the period of control by the de facto regime that took power in the coup of June 2009. The circumstances of his appointment have been questioned; he does not have the kind of degree called for in legislation governing the IHAH. While his patron, the more notorious Myrna Castro, who took over the power of the Minister of Culture during the de facto regime, moved on when Porfirio Lobo Sosa was inaugurated, Paredes, installed by Castro, has stayed in power.

We have written previously about the concerns raised by the union about Paredes' administrative actions. The new document emphasizes the same points.

The summary conclusion: Paredes is not interested in the survival of IHAH, and in fact wants to take it apart, to see it fail. While the present document is somewhat technical in its complaints, what the union has previously emphasized is a pattern of actions that either directly violate, or at least appear to violate, the law, and undermine the mission of the institute, which is to manage cultural heritage and increase public knowledge of it-- not, as Paredes has sometimes seemed to think, to increase tourism income in the country any way he can.

One new addition to the story in the present statement is the news that, following their previous complaints, a special commission was actually appointed in June of this year, including three members of the Consejo Directivo: UNAH representative, historian and professor Olga Joya, herself a former director of IHAH; and the representatives of COHEP, Jubal Valerio, and of SOPTRAVI Ángel Mariano Vásquez. The statement by the union says their report was not presented to the full Consejo, despite what they describe as numerous requests from the commission members themselves and the union.

The document describes an extraordinary pattern by Paredes of failing or even refusing to be part of meetings ordered by the Minister of Culture, to whom he in theory reports, intended to address the complaints raised. Other information we have received has described Paredes having a network of powerful patrons that give him a degree of impunity.

What will happen next? The union is obviously hoping that the government will act to rid itself of a troublesome bureaucrat who has brought unrest to governance, encouraged disruptive interventions by local politicians in national policy, and has, to say the least, not brought intellectual respectability to the Institute.

Which will win-- power and impunity, or prestige and embarrassment?
Posted by RAJ at 11:57 AM