The Burning of Markets: History Repeats Itself 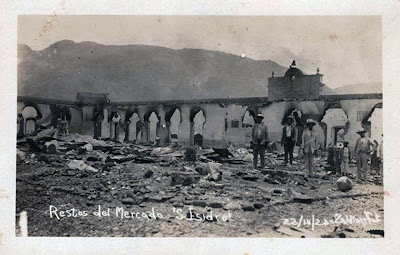 Comayagüela lies across from Tegucigalpa, separated by a mostly dry riverbed. Most North Americans probably spend little time there; there would be almost no reason to do so.

Unless you want to go to the traditional markets. Hundreds of market stalls selling everything from sneakers to food.

The first time I went there, in the late 1970s, I found something magical: tiny fired clay whistles shaped like birds. Never found out where they were made; just fell in love with them.

On Saturday, the markets burned. The AP story says more than 1800 stalls were destroyed. Photos show images of incredible destruction in the Colon and San Isidro markets.

Not surprisingly, Honduran newspapers give much more detail. El Tiempo's story on Saturday describes a six hour fight against the fires. The cloud of smoke is likened to a nuclear explosion.

Tiempo described the apparent beginning of the fire, saying that the most common eyewitness account was

that a spark began the blaze in the sector of piñatas in the Colon market, and as it was 12:15 midday and there was a scorching sun, three minutes were enough to unleash a fire of the greatest proportions that has been seen in the capital.

But this is not the first time Tegucigalpa has witnessed these markets burning. Colleagues who are Honduran history students provided the image reproduced here. It shows the market of San Isidro in April 1924, after it was burned "in a context of war and disputes between the caudillos of the time" (to quote one of my correspondents).

A special feature article published by El Heraldo describes the 1924 fire as the first to afflict the market, and identifies the powerful political bosses in conflict as Tiburcio Carías Andino, Vicente Tosta and Gregorio Ferrera. Carías Andino, of course, became the long-running dictator of mid-century Honduras.

El Heraldo goes on to list a litany of more recent fires in these markets: one in the Alvarez market in the late 1980s; another at the end of the 1990s in the Colon market; the destruction in the Colón, Las Américas, San Isidro and Quinta Avenida markets of 218 stalls, on July 30, 2009; and 20 stalls destroyed in the Galindo market just this past October 23.

The latest fire, according to Tiempo, completely destroyed 846 market stalls in the Colon market; half of the 800+ stalls of the San Isidro market; 60% of the Quinta Avenida market; as well as three rows in the Alvarez market, 10 businesses of the San Miguel market, plus other shelters across from the church of Maria Auxiliadora on First Street, and others on Sixth Avenue along the Colon and San Isidro markets. Estimates are that 5000 small market businesses were affected.

The writers of El Heraldo take the opportunity to blame the market people for the repeated fires that destroyed their livelihood, calling the markets "badly constructed" and "in disorder", "for lack of an integrated vision that would permit them to have worthy installations".

Coming right after a description of the 1924 fire, this characterization struck me as inconsistent with what the historic photo shows: the burned facility then was a formally built masonry arcade, surely a "worthy installation".

But there is a narrative being advanced here of backward common people, for whom the fire of 2012 might act as a kind of housecleaning. Historically, though, it might make more sense to pay attention to the tenor of the communications from my correspondents, who note that with the absorption of Comayagüela by Tegucigalpa in 1937,

the people of Comayagüela were condemned to subsidize with their taxes the administrative cost of Tegucigalpa...the same way that in the colonial epoch, when the Spanish appropriated Tegucigalpa and displaced the indigenous population to Comayagüela, where they were gathered together to be used in labor gangs of Tegucigalpa during the day.

Ricardo Alvarez, the current mayor of Tegucigalpa (and primary candidate for President for the Partido Nacional) has called for the relocation of the market stalls to a different site, as yet unidentified.

He also called for the US to send ATF agents to investigate the cause of the fire, which he described as "very unusual" because it "spread from one marked to another like nothing that has happened before". Perhaps reflecting the disquiet raised by two deadly fires in such rapid succession, Alvarez said that a serious investigation was needed to disprove his suspicion that the market fire was deliberately to "destabilize" the country, saying

"I hope that I might be mistaken in that perception".

Mistaken or not, by spreading this innuendo, he is losing no time in making political capital out of the tragedy of thousands of people.

The exploitation of the working people of the capital city has a long, long history. It shouldn't be surprising that this latest disaster can be so quickly turned into propaganda by a politician. It may not be precisely the same as Carías Andino, Tosta and Ferrera burning the market during their struggle for power. But it has the same stench.
Posted by RAJ at 12:01 AM