Welcome to the End of the World (Or Not): Honduras Maya Edition

Other than the title of one of the world's worst films ever, what does it mean to you?

If you are an archaeologist working in Mexico or Central America, it is likely to bring a sigh of resignation about a conversation no one wants to have. Yes, the prehispanic Maya inscriptions include mention of a date in 2012. Yes, that date "ends" one cycle of the "Long Count" calendar, the 13th cycle of approximately 400 years.

What comes next? Well, not the end of the world. Sorry, but there is nothing to suggest any Maya inscription predicts an apocalypse. In fact, if there were still Maya using the Long Count, we do not really know what they would do on December 22, 2012. There are two main possibilities.

Another possibility is that a new cycle would begin: December 21 would be 13.0.0.0.0, and December 22 would be 0.0.0.0.1. This would be consistent with mythological texts from Palenque that tell of world-beginning events long in the past, which happened the day after a cycle 13 ended, and initiated a new Long Count starting at 1.

Based on confusing mythology about the beginning of time with a prediction of the end of time, a very large group of people have developed popular proposals that the ancient Maya predicted the end of the world, and it will come a year from now. For those who believe it, December 21, 2012 is not just an end of time, it is the end time.

Which brings us to Copan on Wednesday. As El Heraldo writes,

Some fear that it will be the beginning of the end. Others assert that it deals with a new era. What is certain is that together we all began this Wednesday to walk the path that will take us to see the truth face-to-face. The date is 21/12/12.

The clock began ticking. Within exactly one year the world will discover the truth about the enigma that will close the Maya calendar and for that, since yesterday the eyes of humanity turned toward Copán Ruinas, the Maya heart of Honduras.

In case the prose isn't purple enough, take a look at one of the images that accompanied their story: 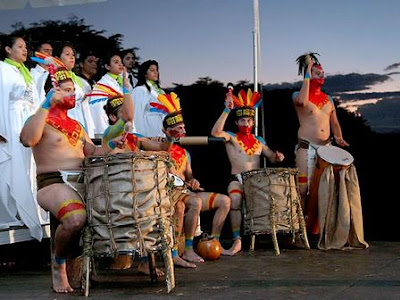 What you are looking at here is spectacle, the outright exoticization of the history of an indigenous group. Read carefully through the coverage and you will not find the names of any representatives of the Chorti, descendants of the authors of the inscriptions on Copan's monuments.

El Heraldo assures us that

Never before in the history of humanity has a generation been present at the beginning or the end of a cycle of baktuns, and therefore 2012 will be a unique moment, in which for the first time humanity will be witness to a change of epoch according to the Maya measurement of time.

That would be news to the ancestors of the Maya who lived lives as hunter-gatherers in 3114 BC, when Palenque's inscription record the beginning of our current era. But of course, what the passage means, other than asserting a universalizing claim to Mayaness as a unique Honduran heritage divorced from any actual Maya people, is that never before has any human being seen the kind of shows and spectacles that are being trumped up for this manufactured event.

On hand to start the festivities off was Porfirio Lobo Sosa, quoted by El Heraldo as saying: 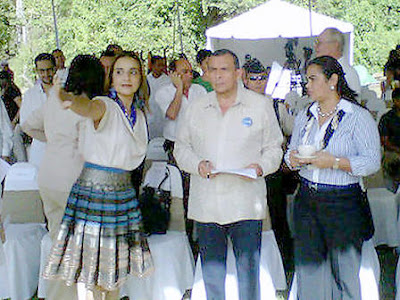 "This is the countdown of this era that we all are waiting for and during these 365 days that today begin we have proposed to celebrate many events of an academic nature. We hope that the world will come to know the marvels of the Mayas and the impressive studies that have been done."

"We hope that the world will come to know": that of course is what this is all about: the desperate need to revive the tourism industry and get it to yield more money for the Honduran economy.

El Heraldo, again, is clear about making the connections:

In Copán Ruinas they are conscious that this opportunity cannot be let past and they want to take advantage to the maximum to revive national and foreign tourism...

Juan Ángel Wélchez, president of the [organizing committee, Comité Copán 2012], affirmed that they would do everything in their power so that Copan would be the center of attention of the world. "It is of greatest importance, this year coming, it is an excellent opportunity to relaunch Copan as a tourist product of high quality for the world. These last years have been difficult, but we believe that now it can change..."

The secretary of tourism, Nelly Jerez, also underlined the importance of promoting this tourist destination in the world and boosting enthusiasm for the Maya civilization that inhabited the zone. "This is the best opportunity and the best window that our country could have, our Maya culture. This is the moment of Honduras".

News reports say that the hope is for 300,000 tourists to visit Copan this year.

Of course, Copan is not alone in trying to exploit 2012. International news coverage gave Honduras shared billing with Guatemala, undercutting the repeated claim in Honduran media that Copan had a special role in astronomy and calendars, based on a now-discredited interpretation of the figures and dates on Copan's Altar Q as a reunion of astronomers.

Starting the festivities, Copan witnessed an enactment of a so-called "fire ceremony" and ballgame, as El Heraldo said, "following the traditions of the Maya". In other coverage, they describe the "new fire ceremony" presented during the recent festivities more accurately, as a hodge-podge of Mexican indigenous ritual and Euro-American New Year's ideologies:

This ceremony comes from the moment in which the calendar of Anahuac was invented, around 4,000 years ago, and has been maintained to the present, being celebrated by many indigenous peoples, although adapted to Catholic festivities.

So where are the Chortis as Honduras inaugurates this celebration of a badly misunderstood, garishly exploited version of their historical legacies?

On December 15, eighty Chorti families were evicted from land in the municipality of Copan Ruinas by police and members of the armed forces:

The Chortis, located in the community, asserted that they had lived for twenty years on the properties where they built their houses. Nonetheless, the sale of the property to another owner initiated the conflict that ended with their eviction.

Since five months ago the new owners of the property had appealed for the Chorti to move out of the lands; in the face of the conflict, directors of the National Council of Indigenous Chorti Maya (Consejo Nacional Indígena Maya Chortí) asked the government to assist in purchasing other lands. The government committed on the 12th of October of this year to give 8 million lempiras (about $445,000), but the money did not arrive and the campesinos were evicted.

The government promise made on October 12 came, of course, in response to Chorti occupying the Copan archaeological site. This is a tactic, as we noted at the time, that has been used by Chorti for some time to enlist the visibility of the site to make their own contemporary lives, poverty, and dispossession, visible.

Don't expect to see that authentic reality of Honduran Maya culture covered with the tourism festivities. After all, we don't want the international tourists to feel guilty, now do we?
Posted by RAJ at 8:20 AM