So just what is this indicator called "control of corruption" for which the Lobo Sosa government would like to allocate blame to Manuel Zelaya Rosales?

The Millennium Challenge Corporation scorecards are built from data assembled by a variety of third parties. This particular indicator is one of six assembled by the World Bank ('voice and accountability', 'political stability and absence of violence', 'government effectiveness', 'regulatory quality', 'rule of law', and 'control of corruption').

The World Bank says the 'control of corruption' measure

captures perceptions of the extent to which public power is exercised for private gain, including both petty and grand forms of corruption, as well as "capture" of the state by elites and private interests.

Note that last part, about capture of the state by elites and private interests. That's a big part of the problem in Honduras. Not to say that there isn't corruption by government officials for private gain because there certainly is, though no one has quantified it. However, the capture of the state by elites is a significant factor in this indicator, and the coup d'etat exposed just how tightly the Honduran state has been captured by "elites and private interests".

As our previous post shows, the MCC scorecards don't support the claim that this measure was the key to Honduras not being selected for a new Compact. Here's a chart of the World Bank data on this measure from 1996 to 2009: 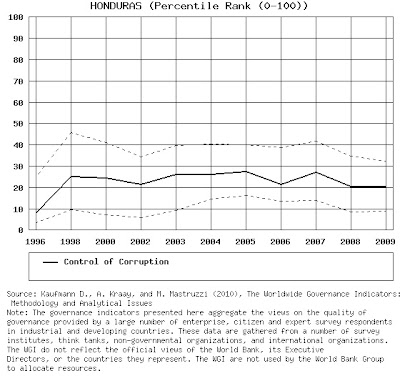 What the chart shows is that 71%-80% of the world's countries rate better than Honduras on this measure, and that the results haven't changed that much, regardless of which party is in power, since 1998.

Our previous post also noted that Honduras had some problems during the MCC Compact in the 'rule of law' measure. According to the World Bank, 'rule of law'

captures perceptions of the extent to which agents have confidence in and abide by the rules of society, and in particular the quality of the contract enforcement, property right, the police, and the courts, as well as the likelihood of crime and violence.

The World Bank supplies data from 1996 through 2009 for this measure. Here's the chart: 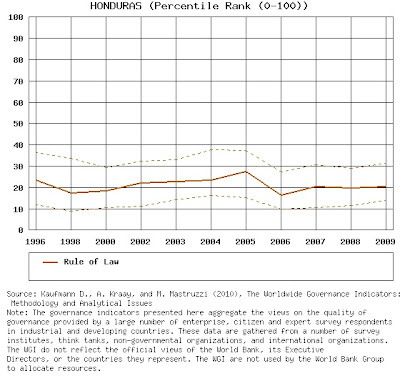 As you can see, here the chart again shows Honduras with a low score, with 70% to 82% of the countries rated scoring better. It shows a pattern of year to year gains, then a steep crash under the Maduro administration, and then slight gains again under Zelaya.

Politicians, of course, are not required to pay any attention to actual data. In the Honduran context, it is probably great politics for the Lobo Sosa administration to blame this decision on Zelaya. But failing to come to grips with the actual history of performance is unlikely to help the country make a case to the MCC for a future Compact.

It isn't hard to find the data; what may be lacking is the will to face the facts.
Posted by RNS at 7:39 PM

I do have to wonder why neither the Rule of Law nor the Control of Corruption measures show no visible effect (outside of statistical noise) upon the execution of a coup. One wonders about the World Bank's methodology.